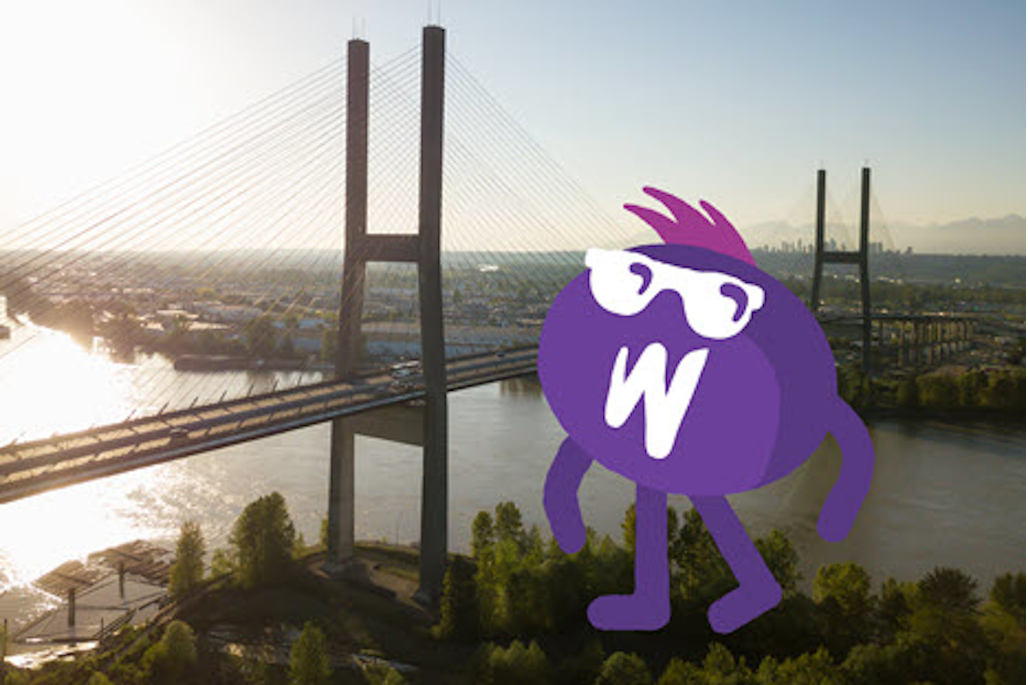 Berry the Wild Blueberry against the Alex Fraser bridge

Bragg Communications’ Eastlink filed a trademark for “Wild Blueberry Internet” on Feb. 15, an internet service provider whose only offering is a pre-paid $60 plan with 100 Mbps download, 10 Mbps upload and unlimited monthly data allowance.

The story reveals that Bragg Communications’ Eastlink is launching a new brand called Wild Blueberry Internet that will offer just one $60-plan at 100 Mbps download speeds and unlimited data allowance.

Berry is Eastlink’s newest brand mascot, and he’s apparently moving to Delta to provide residents in the British Columbia city with a single pre-paid plan of 100 Mbps download and 10 Mbps upload for $60.

That’s according to the website of Wild Blueberry Internet, the name of the latest internet brand that dates back to the time when the Bragg family, which owns Eastlink through parent Bragg Communications, was still in the business of selling — wait for it — wild blueberries.

The downUP was tipped off about the new brand when it came across a trademark application for “Wild Blueberry Internet” filed on February 15 by Persona Communications, which was a service provider before Eastlink purchased it in 2007.

The single plan is pre-paid, meaning customers pay for the upcoming month’s service. Its choice of 100 Mbps download, it said, is based in research.

“According to the latest data, 100 Mbps Internet is fast enough to support all your favourite streaming services, social media accounts and websites,” the website reads. “You can also rely [on] it for your gaming and video chatting needs.

“There’s only one Internet, so why are people paying so many different prices to connect? We put the boot to all the stuff you don’t need to give you easy, affordable Internet,” its website says.

A request for an interview to an Eastlink spokesperson early Friday evening was not returned.

While it’s unclear whether the service has launched, the Wild Blueberry Internet website is very new. According to domain registry records, Eastlink purchased the .com brand name, which redirects to the .ca version, on January 9, 2021. A further Google caching (server storage) search reveals that the site’s terms and legal pages were published as early as last week. A Google search of the brand’s images shows an annotation — when Google cached the site’s pictures — of last week. The site doesn’t appear anywhere near the top pages of a wild berry internet search, unless those words are wrapped in quotes. It has not registered any social media handles for the name. And its browser tab icon, also known as the favicon, was Eastlink’s — it also registered the domain with that favicon — until it changed it to a coloured “D.”

It’s also currently unclear if the brand, which will be based out of Nova Scotia, will expand outside of Delta. The website only allows you to choose B.C. for service. Eastlink has its own fibre infrastructure in several areas of the country. It began delivering gigabit service to Halifax in 2015.

Beside buying Persona, the cable company has grown through a number of other acquisitions over the years, including of Amtelecom, Bluewater, Delta Cable, and Coast Cable.

What’s left to ask is how the market will respond to such a plan and if Delta is perhaps intended to be a test market for a broader rollout. Eastlink’s own brand lists its 100 Mbps, unlimited data package at $80 with a promotion.

Speeds of 100 Mbps download and 10 Mbps are in a different bracket compared to the larger competitors in the province.

Telus, the dominant west coast player, and Bell both offer symmetrical 150 Mbps download and 150 Mbps upload for about $90.

There is a large number of internet service providers — both facilities- and wholesale-based — in and around Delta. Time will tell whether Berry’s efforts to convince residents of 100/10 speeds will bear fruit.

According to an internet price study by Picodi in December 2019, average prices in Canada for 100 Mbps — considered by the study at the time as the “most frequently” offered in the majority of countries surveyed — was about $62 USD.

Considered Canada’s fourth major player, Freedom pushed the wireless space to new limits with its audacious 10 gigabyte for $50 Big Gig mobile plan in late 2017 that caused customers to flee the larger players — by some of the companies’ own admission. That many gigabytes on a Canadian mobile plan, at the time, was an anomaly, and it forced the big players to respond in-kind with their own similar deals.

In the summer of 2018, Freedom hijacked the conversation on low-cost data plans by offering 1 GB of data for $30, undercutting proposals by the big three — Rogers, Bell, and Telus — before the CRTC, which requested those plans. Then in late 2018, Freedom tried during the holiday season to poke the bears again by offering a 100-gigabyte top up on certain data plans.

While comparing wireless and wireline isn’t exactly berries and berries, the wild new internet offering from Eastlink could yet present the latest test for the thesis — posed by the country’s biggest players — that internet competition in Canada is alive and well.