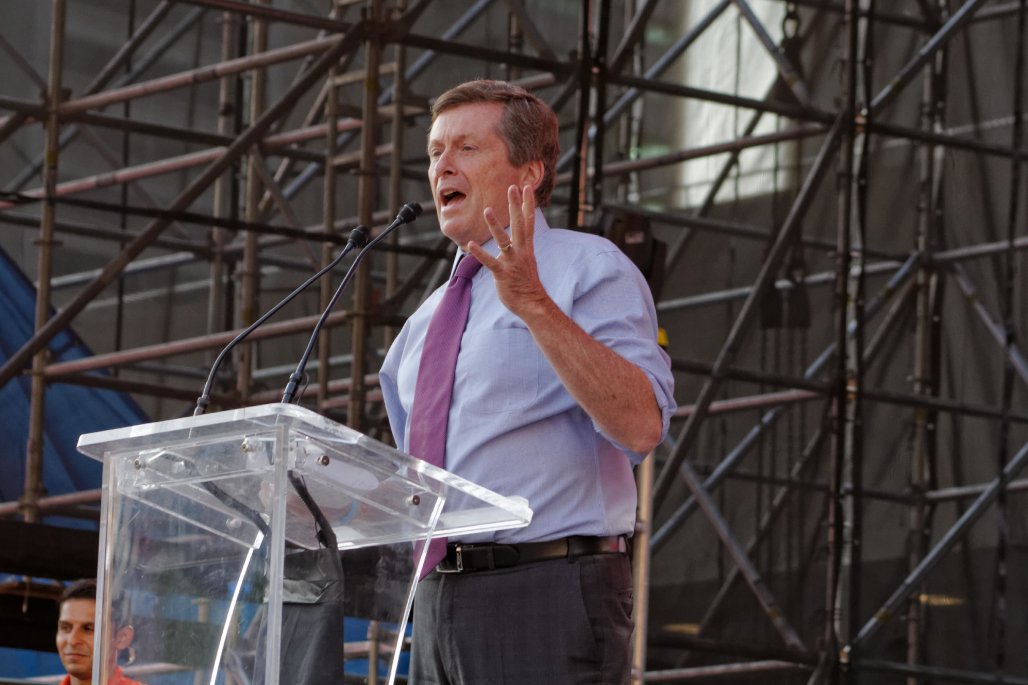 Earlier this month, Toronto city council approved an ambitious project that will leverage city resources to build a public broadband network. Bell is preparing to talk to city officials about it.

Bell told the Toronto Star in an article about ConnectTO this month that, “Internet is a competitive market and we offer service plans to meet every budget.” Now, it will lobby that point directly to city officials.

Days after saying Toronto is a sufficiently competitive market and that it “offers service plans to meet every budget,” Bell has filed to lobby the city on its proposal to build its own broadband network.

The company registered its intent on Tuesday to have a “discussion related to the Connect TO report,” according to the registrar.

A Bell spokesperson said the company will be “talking to the city about a major connectivity proposal like ConnectTO,” but had “nothing specific to report.”

The ConnectTO project, approved last week, will build the infrastructure using existing fibre, buildings, lights and sidewalks and will hire a private company to deliver the services to homes and businesses.

The project will have two phases that will include test sites at Humber River-Black Creek, Scarborough Centre, and Scarborough North starting in late 2021. The second phase will see the network’s launch in early 2022.

The network will be open to “qualified” service providers to generate revenue for the city, which will go back into expanding access and lower costs, the city said.

Bell told the Toronto Star last week that the city already has sufficient competition — suggesting prices are competitive — and that they offer plans across a wide band of budgets.

But that argument runs counter to some of the findings in a report by Ryerson University and the Brookfield Institute that showed half of the two per cent of Toronto households without home internet don’t have connectivity because of cost.

The report, which informed the decision to greenlight the project, said 38 per cent of all Toronto households and half of low-income households have downloads speeds below the universal target of 50 Mbps set by the CRTC in 2016. It also said 34 per cent of Toronto households are concerned that they won’t be able to pay their internet bills over the next few months, a demographic that consists of low-income and visible minorities.

The problem with the report, critics say, is that it’s findings are extrapolated from a small sample size of 2,500 residents (done between November 25 and December 3, 2020 with an accuracy of within plus or minus two percentage points, 19 times out of 20) that they say ultimately doesn’t reflect reality.

Telecom consultant Mark Goldberg argues the study couldn’t find enough people without broadband to “fully understand the issues that keep people from subscribing.” But even then, he said, only half of that small sample said price was an issue.

How much the service will cost is unclear because the provider hasn’t been picked. This will extend the time horizon of when the services can get up and running, which Goldberg said doesn’t solve the issue of getting social services to those who need it most “now.”

Rogers told the downUP that it shares the city’s view about the importance of connectivity. But it said Rogers high-speed internet is “available to virtually all homes and businesses in the GTA.” It added that its $10 internet program Connected for Success, launched in 2013, and the federal government’s similarly low-cost 2017 Connecting Families program have helped bridge the connectivity gap.

Rogers has said that its services cover 97 per cent of residents in the Greater Toronto Area, with additional connectivity filled in by competitors including Bell.

“We are continuing to make significant investments to meet growing demand and continue providing reliable connectivity across all parts of the city,” Rogers added.

But Matt Stein, head of the Competitive Network Operators Consortium (CNOC), which represents smaller providers, said if Toronto of all places is having connectivity issues and it takes this kind of step, then it is recognizing that the status quo isn’t working.

To unpack that: third-party internet service providers purchase network access from the bigger carriers to provide their own services in order to increase competition.

The CRTC is currently deciding those new wholesale access rates. In August 2019, the regulator set new lower rates that so staggered the larger carriers, that they appealed and won a freeze on the implementation of the rates. They argued that lower rates would discourage investment in their networks.

“If the CRTC, backed by strong political will, updates and enforces that access regime, then by the time Toronto’s network is built all Canadians will be benefiting from more competition,” Stein said.

In an email, city spokeswoman Diane Morrison said the city does not have any consultation plans with the telecoms. “There may be opportunities for additional market sounding activites, but those actions would be part of the procurement process, and not considered consultation.”

But she said the city does have plans to consult with various stakeholder groups as part of the project, including with the tech community, end users and anti-poverty advocacy groups in “information gathering sessions to leverage community expertise prior to the tender documents being finalized for ConnectTO.”

“As well, the City will host information gathering sessions with various groups, as was requested by City Council. Additional consultations will continue, in accordance with the rules around procurement and lobbying,” she added.

Stein said CNOC is making itself available to engage with the city as it moves through the project assessment.

“We’ve asked to be at the design table to lend our expertise in infrastructure and access,” Stein said. “In the long-term, we’ve asked that they support a clear, stable regulatory regime.”

Responding to a question about what circumstances would lead to the axing of the project, Morrison said the city will go back to the executive committee by the end of this year to provide an update on the project’s goal toward “digital equity, digital access and municipal broadband.

“At that time, Toronto City Council may provide direction on the future of the program,” she said.

The pandemic has brought into focus the need for digital preparedness, as more and more services move online.

Municipal broadband projects have been tossed around as new solutions to old connectivity problems. The rural town of Olds, Alberta created its own internet provider, called O-Net, to deliver gigabit speeds to homes and businesses. Critics, however, have argued that municipal-owned internet could come at the cost of innovation when there isn’t adequate competition.